STEWART SMITH helped shape MFC Foundation in the way you see it today.

Not just the Foundation but football at grassroots across the North East of England.

That’s why teams came from far and wide, from Scotland in the north, to Thirsk in the south, Teesside, Tyneside, Tyne and Wear and North Yorkshire.

The venue our Herlingshaw Centre, the tournament, the the inaugural Stewart Smith Memorial Trophy spread over two days and several age groups.

Over the course of the two days, 68 teams and close on 550 players celebrated contested trophies through the age groups and biggest endorsement anyone could have wished for came from Stewart’s widow, Susan, who travelled from her home in Northumberland to present the prizes and simply said: “Stewart would have loved this.” 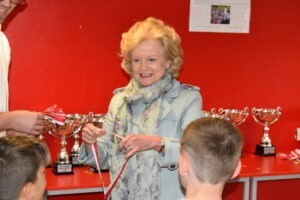 Mixing the passion for his football club with his vision in the world of business to the benefit of communities throughout the area. It was that business acumen that saw Stewart named North East Executive of the Year in 2010.

Stewart sadly passed away before he had time to add to his considerable legacy throughout the Teesside area, but his family are determined his work will continue to benefit communities he was so proud to be part of.

The current chair, himself an esteemed and highly-respected of the Teesside community, John Baker, spoke with all the teams, re-enforcing the message of why they were there. “Stewart was a great man and did more for this area and grassroots football than many people know. He lived to make things better for our communities.” 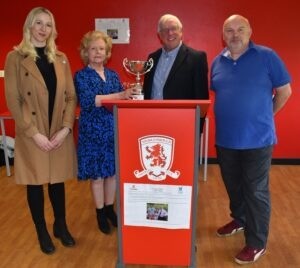 MFC Foundation is indebted to the Tees Valley Community Foundation for their sponsorship of this event and their Chief Executive Officer Hugh McGouran was delighted with what he saw, as was Helena Bowman, former Head of Foundation and now Head of Business Operations and Community with Middlesbrough Football Club.