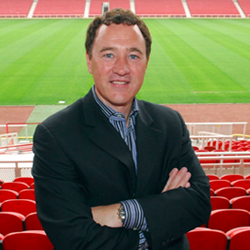 A lifelong Boro fan, Steve Gibson joined the board as the club’s youngest ever director at the tender age of 26. In 1986, Steve formed the consortium that would go on to save the club from liquidation.

In 1994, Steve somewhat reluctantly succeeded Colin Henderson as Chairman. It was Steve’s vision that saw Boro leave Ayresome Park for the new all-seater Riverside Stadium in 1995, and his appointment of Bryan Robson as manager helped launch the ‘Riverside Revolution’, which saw Boro achieve three Wembley cup final appearances within 12 months during 1997 and 1998.

One of football’s most popular figures, the biggest cheer during Boro’s 2004 Carling Cup Final victory over Bolton Wanderers was heard when Steve was shown on the giant screen at Cardiff’s Millennium Stadium. During the same year, he celebrated ten years at the top of the club and was given the Freedom of Middlesbrough in recognition of his work for the town.

Steve is also managing director of international tank container services company Bulkhaul, which he began in his early twenties by borrowing £1,000 from his father. The firm specialises in transporting chemicals around the world and has grown to become one of the UK’s top private companies.

Steve has a passion for the local community of Teesside and was instrumental in the launch of the charity in 1996. 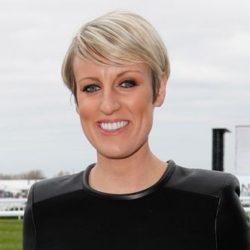 Award-winning business presenter Steph McGovern has been working in financial journalism for over 10 years and is part of the BBC Breakfast team.

Steph travels all over the UK to cover economic and business news for the BBC. Whether she’s talking to workers in factories or interviewing FTSE 100 chief executives in the studio, Steph makes it her mission to find out what’s going on in the real economy.

Originally from Middlesbrough, Steph is a proud supporter of MFC Foundation. 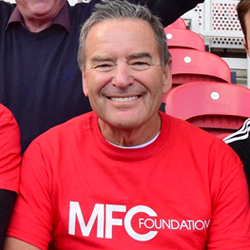 His first broadcasting position was as a Radio Tees reporter on Middlesbrough FC in the late 1970s. On 23 November 2007, Jeff was awarded an honorary Doctor of Professional Studies by the University of Teesside. In 2007, Jeff famously defended Middlesbrough on live TV after it was criticised on a national television programme.