THIS Premier League Girls Football project is aimed at females in the age range of 11 – 25, and operates at 12 Satellite clubs around the Teesside area, predominantly ran by female coaches.

The satellite clubs are located mainly in secondary schools and ran continuously throughout the year for at least 30 weeks of the academic year.

The project aim is to increase participation in female football nationwide and is funded and supported by the FA.   Middlesbrough Football Club Foundation works with the North Riding FA  to foster the sport and encourage the transition into local football teams.

Over the last two years the programme has worked with the FA / Premier League, who encourage clubs such as ours to enter teams into national competitions, with the most recent two at Wembley Stadium.  These events were both followed by tickets to see National and International female football being played at the stadium.

MFC Foundation has had many successes. and last year Trinity Girls football team were awarded “Team of the Year” at the Regional Awards evening hosted by Hull Tigers.

Working in conjunction with Sunderland AFC, our girls have been involved with Ultra-Violet football (sometimes called ‘glow in the dark’ football), and more recently at an event in Hull the girls were given the opportunity to try out Bubble Football.

In this current year following local elimination rounds, we had a girls’ team (Under 13 years) travelling to Chelsea to compete in the Premier League National Championships at Stamford Bridge.

As well as the opportunity to compete at all levels from inter-club through to national, there are opportunities for girls to act as volunteers, and in some instances as Ambassadors for Sport.  Opportunities exist for individuals to train as FA Level One coaches, or even as referees which both helps coaches to share the load, whilst also gaining experience.

‘Back to Football’ has proved to be a big success, held at the Herlingshaw Centre in South Bank. The sessions are aimed at older females who used to play football in their junior years, and are looking at returning to playing in a both friendly and amateur-orientated platform.

For details on your nearest site contact Rachel Horsley on 07758 231 008 or through email on rachel.horsley@MFCFoundation.co.uk

We are inviting teams to join our U14 girls Football League! 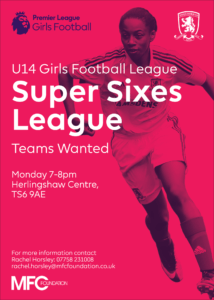 Group of female footballers listening to a coach

There are currently no tours of the Riverside available. This is due to work on the pitch, in the stadium…

END_OF_DOCUMENT_TOKEN_TO_BE_REPLACED

The Boro Jackpot continues to help power our wide variety of community projects across Teesside and North Yorkshire. Tickets cost…

END_OF_DOCUMENT_TOKEN_TO_BE_REPLACED

MFC Foundation provides opportunities for people across the Tees Valley that have a range of disabilities, including but not restricted…

END_OF_DOCUMENT_TOKEN_TO_BE_REPLACED

A MEMORIAL tournament that will ensure the name of a lifelong Boro fan and former trustee of MFC Foundation lives on is to be staged at the end of this month.

Fittingly, the Stewart Smith Memorial Trophy, a football tournament aimed at U7-U12-year-olds, will be staged over two days at the Herlingshaw Centre where seven years ago he cut the ribbon on a brand new 3G outdoor pitch.

Stewart sadly past away before he had time to add to his considerable legacy throughout the Teesside area, but he family are determined his work will continue to benefit communities he was so proud to be part of.

He helped shape the Foundation in the way you see it today, mixing the passion for his football club with his vision in the world of business to the benefit of communities throughout the area. It was that business acumen that saw him named North East Executive of the Year in 2010 – a moment of great pride.

If you would like to know more details about the Stewart Smith Memorial Trophy which will held on Saturday 28th and Sunday 29th May, please e-mail Sean at sean.mackin@mfcfoundation.co.uk or ring the Herlingshaw Centre on 01642 282128