MFC Foundation launched the first installment of it’s Riverside Ready programme in January this year, with four schools across East Cleveland. The programme is an #iwill endorsed movement, funded by Virgin Money Foundation, and aims to get as many young people across the Tees Valley as possible involved in Social Action through youth-led Fundraising, Volunteering and Campaigning.

Over 200 children across our partner schools (Badger Hill Academy, Whitecliffe Academy, Freebrough Academy and Skelton Primary School), emerge this week into the highly anticipated delivery phase of their programmes. Students have been working hard over the past ten weeks assessing their local community and developing reactive social action projects to improve the life chances, reduce general risk, and increase awareness of important health and well-being topics, in their local communities.

Rudy Gestede (pictured below) leads the movement by supporting the R13 Campaign, recently launched by students from Badger Hill Academy. The campaign, designed by students in partnership with MFC Foundation Staff, aims to raise awareness of the age restrictions liked with online social media use. 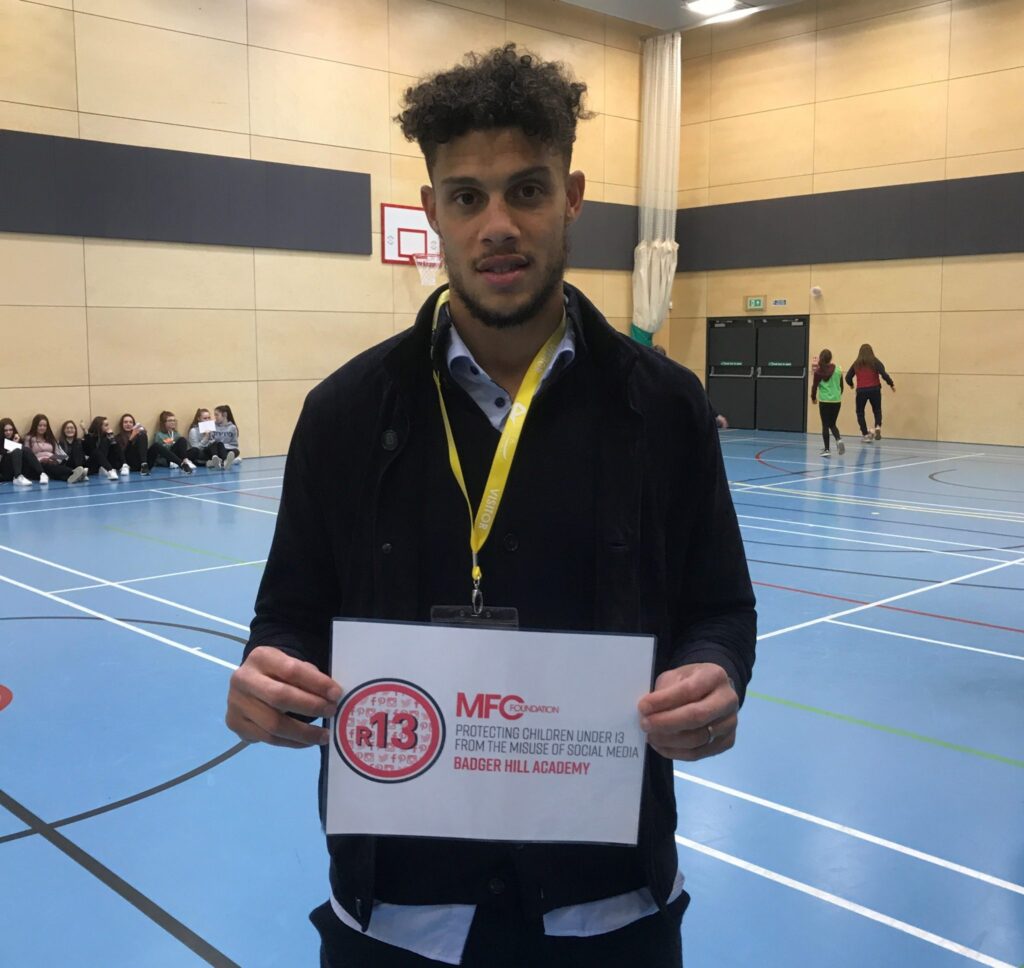 From the outset, students at Badger Hill Academy raised concerns over under age use of social media sites, something they identified as a prominent issue in the school, and around the wider community in general.

This is a message which Principal Heather Rowe is backing intently.

She said: “Young people accessing social media designed for older students, is a national issue and has been raised by the government in recent weeks as having a significant impact on mental health.”

Students were inspired after they discovered that age restrictions were in place for commonly used sites, like Facebook, Twitter, Instagram and Snapchat. However, they felt that the execution of this message to the general public was under-documented, much like the risks associated. So they decided to take matters into their own hands.

This week, our year 6 students, will be carrying out a Social Media Research project with KS2 parents and students across the school. They are also urging Parents, Staff, Professionals and the general Community, to back the initiative, by pledging support for the R13 programme. You can do this, by following, retweeting, sharing and supporting our Social Media Campaign all week! Students, MFCF and Staff involved in the programme will be mapping the journey of the R13 programme across the Tees Valley over the next week.

“Social Media is a fantastic tool, and one which is freely accessible to most people,” she said.

“Unfortunately, it can pose all kinds of threat to young people whom, through no direct intention, can fall under it’s misuse. It’s important we get this message out to all students and parents, you cannot expect families to adhere to something they are unaware of.”