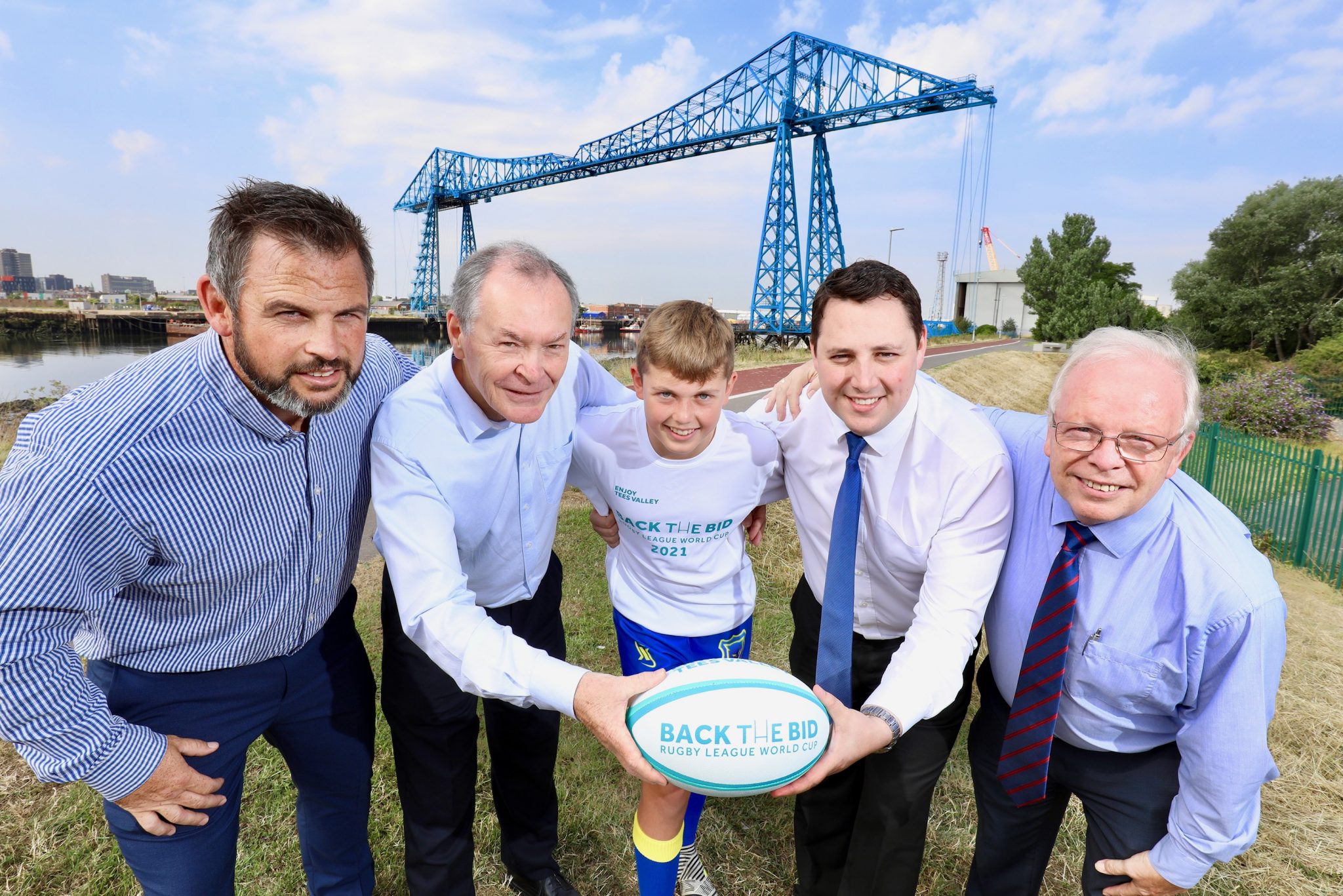 A bid which aims to bring international Rugby League World Cup games and players to the Tees Valley in 2021 has been officially kicked off by local team Yarm Wolves.

Peter Lynn, from the Tees Valley under-16s rugby league team Yarm Wolves, kicked a rugby ball “over the Transporter Bridge”, alongside representatives from the group behind the application.

If successful, the bid could give the region an economic boost of up to £8million, attracting tourists from across the world to the area.

It includes a proposal to host international group games and a semi-final in the men’s competition as well as to provide a base for the Australian National Rugby League Team.

It outlines Tees Valley’s location, exceptional facilities and key venues including the Riverside Stadium and Northern Echo Arena and previous experience in hosting international sporting teams at Rockliffe Hall. It also highlights the region’s commitment to creating a lasting legacy for the game.

Matches taking place in the region would also work in support of Tees Valley’s application to be named City of Culture 2025. 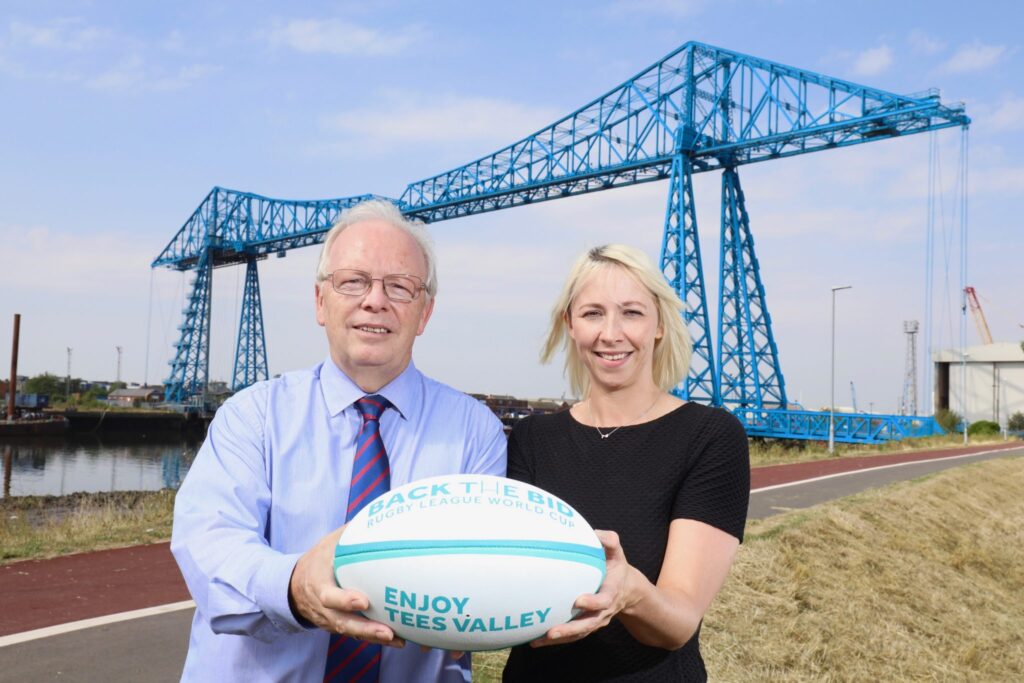 The bid has had strong backing from the Tees Valley Mayor, Ben Houchen, who said: “We’ve got this bid off to a flying start. We have worked to produce an excellent application that promotes our region and explains why we would be a great fit to host the Rugby League World Cup and spread its message.

“We’ve started doing our bit and now it’s down to everyone in the Tees Valley to show their support to bring this world-class event to our area. I’d ask everyone to back the bid, shout about the Tees Valley on social media and get in touch on the Enjoy Tees Valley website.”

Dave Budd, Mayor of Middlesbrough, said: “This is a huge chance to showcase Tees Valley as a vibrant, modern, cultural hotspot to a global audience. Securing games in this top-quality competition will mark us out as the place to be and, by capturing the region’s community spirit, will help rugby league grow.”

Mark Ellis, Chief Operating Officer at Middlesbrough Football Club said: “We have the excellent resources and facilities necessary to host international games of this size with a successful track record in hosting Team GB before the 2012 Olympics and a number of England U21 International games. However, we are confident that it is the passionate people of Tees Valley that will get behind the tournament and make it a lasting success with a strong legacy.”

Helena Bowman, Head of MFC Foundation said: “MFC Foundation are proud to be part of the Tees Valley’s bid to host the Rugby League World Cup 2021. By holding the World Cup in our region, it can help to leave a lasting legacy of Rugby League in our area, as well as helping to inspire young people and adults to raise aspirations through increased physical activity and community projects.”

“New Zealand All Blacks head coach Steve Hansen sung the praises of our outstanding facilities when Mowden Park played host to that team. We agree with him that we’re one of the best parks in the world and, we think, one of the best parts of the world. This bid gives us a perfect opportunity to highlight that.” 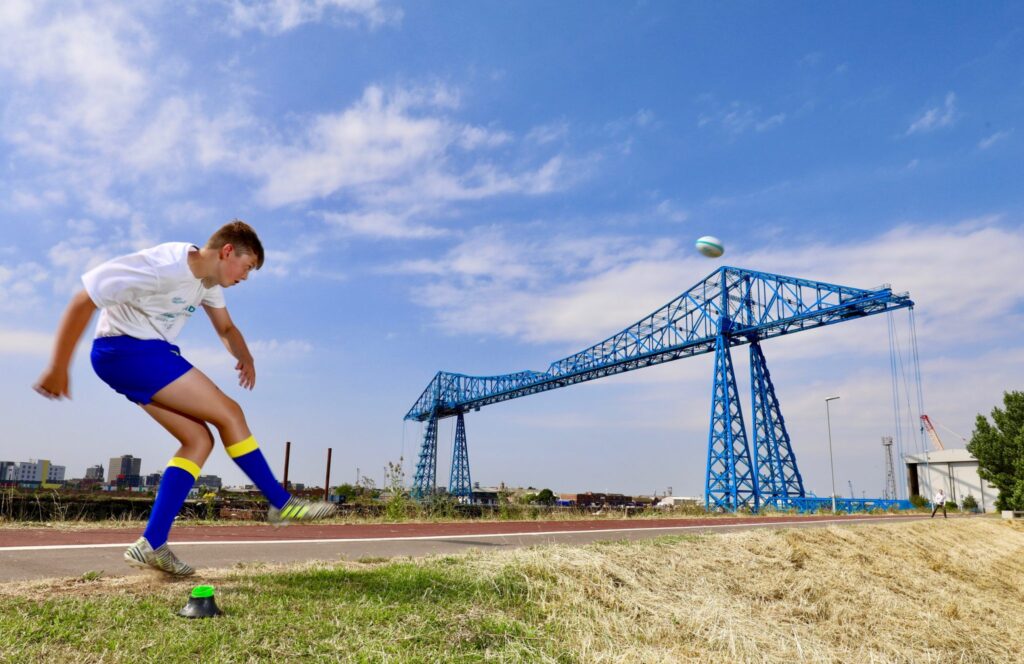